6 Tips for Entrepreneurs Seeking to..

Real Talk: What to Expect on..

Here’s Your (Complete) Guide to a..

Success in the Digital Age Looks..

Want to Increase Your Productivity?

Who Says Leadership Is Reserved for..

Sick of Earning Less than Your..

From Rock Bottom to Woman on..

Calling All Moms Re-entering the Workforce 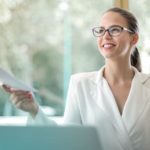 Hey, Let's All Be Goal Diggers!

The Secret to Success in Entrepreneurship?..

All Your Questions About Launching a..

Get comfortable asking at home and at work.

When I woke up the other morning, I could sense my body was holding in some stress. I usually feel it in my shoulders and with the slight tightening of my stomach. Not only did I have a morning of back-to-back meetings that day, but I also needed to renew my daughter’s visa and get a quote to sell my car. It was approaching 11am and I had to pick up the kids by 2:30pm. I could feel a tension headache brewing.

That day could have gone two ways. A few years ago, I would have done it all by rushing around like a mad woman with a will to play the martyr card. I would’ve been a bit flustered to say the least. However, I no longer allow myself to be that way these days. It’s not an emotion that I like or want, so I called and asked if someone would pick up my kids. To be fair, that someone was my mum – I am so lucky to have her live close by to me. I learned a few years ago that asking for help is one of the most liberating actions I could do for myself, and it is essential for the following several reasons:

It is so easy to expect people to be mind-readers and know what we want. “I worked so hard for that promotion, of course they know I want it.” “All I wanted for my birthday was flowers and a card, and I did not get it.” Sound familiar? Asking for what we want and being very clear and specific is important as, firstly, it allows us to verbally state to people what we want. By just putting it out there, we ourselves become clear on what it is we want.

Sometimes, we think we want something, but we don’t actually know what it is, so by asking for it, we gain more clarity. Secondly, we are empowering the people around us to be able to give us what we want. I don’t know about you, but I get so much joy from giving presents to my loved ones and seeing their faces light up from what I bought them. People like to see their cherished ones happy, so by asking for what you want, you are giving people the opportunity to give. Don’t deprive them of the gift of giving!

We Get Better at Receiving

We Become Clearer on What It Is We Need to Do

When we get good at asking for what we want, we get a clear picture of what we need to do if we do not get it. For example, say you want to get a pay rise and ask your boss for one. They may say no, but at the same time, they will likely set clear objectives that will help you get it. This allows you to know exactly what it is you need to do to get that pay rise.

This is so much more clear-cut than thinking you deserve a raise, not asking for it, resenting your boss for not giving you one, your boss picking up on your resentment, and thinking it’s because you’re unhappy and assuming that you don’t want to be working there anymore, and finally concluding that you don’t deserve a raise due to your attitude. This is a more extreme example, I know, but the point I am trying to make is that if we don’t ask and then get annoyed because people are not mind-readers, we are actually harming ourselves as it causes negative reinforcement and emotions.

It was Diwali a few weeks ago, and my daughter’s class was putting on a dance show. Only a few children were going to be doing the dance and the parents all got sent a list of names of the dancers. My daughter’s name was not on the list. Needless to say, she was devastated on the morning of the assembly. She wanted to be in the dance, so she came up with the idea of taking the clothes she would need anyway and asking her teacher that morning if she could join the other dancers.

I encouraged her to do so, but told her that if she was prepared to ask, she should also be prepared to be turned down. She agreed and went to school full of hope. Later in the day, I got sent a video of the dancers, and lo and behold! There she was, dancing on stage with the others. What struck me about this was that she had built up the confidence to ask for what she wanted, even with the risk of being rejected. You need to be ready to get disappointed if the outcome is not what you want, but be confident enough to ask in the hopes that you might get it.

Try to make a list of three things you could ask for this week. It could be asking your boss for that promotion you’ve always wanted, asking your partner to take the kids in the morning so you can get some alone time, or simply asking a friend for a favour. Remember, by asking for what you want, you not only empower yourself but also others to be able to enjoy the gift of giving. Happy asking!

Noona Nafousi is a leading life coach based in Dubai, offering workshops to both corporations and individuals as well as conducting one-on-one coaching sessions.